Lidar is best known as the technology that enables self-driving cars to make sense of the world. But the tech, which uses pulsed laser light to measure range, is also utilized in other ways — such as helping uncover ancient Mayan relics from the sky. That’s what researchers at the University of Arizona in Tucson recently managed when they used an airborne lidar system to discover the oldest ceremonial ground in the Maya area in southeast Mexico. This turned out to also be the largest in the entire prehispanic history of the region — about 1.4 kilometers in length and 15 meters in height. Aguada Fénix, as it’s known, was constructed somewhere between 1,000 and 800 BC, according to a Bayesian analysis of radiocarbon dates carried out by researchers on the project. That pre-dates the construction of the Mayan pyramids.

Hovermap is the flagship product of Emesent, an Australian drone, lidar and data analytics company. It consists of a mobile scanning uint with SLAM-based mapping that is intended to be mounted on a drone to provide autonomous mapping (but can also be used as a handheld device). This update, announced today, brings true color augmentation to point clouds, providing additional context for visualization.

Cesium has announced that its users now have access to Cesium OSM Buildings, a global base layer of more than 350 million 3D buildings. Cesium OSM Buildings expands the suite of Cesium Global Base Layers that includes the worldwide terrain, aerial imagery and street maps already available on Cesium ion. “As digital twins and urban mapping gain momentum in 3D geospatial, we are excited to offer a global layer of 3D buildings that can be easily visualized, styled and analysed in an efficient and interoperable manner using 3D Tiles,” said Cesium CEO Patrick Cozzi. “Cesium OSM Buildings will help geospatial developers innovate by giving urban context to 3D applications for a broad range of use cases.” 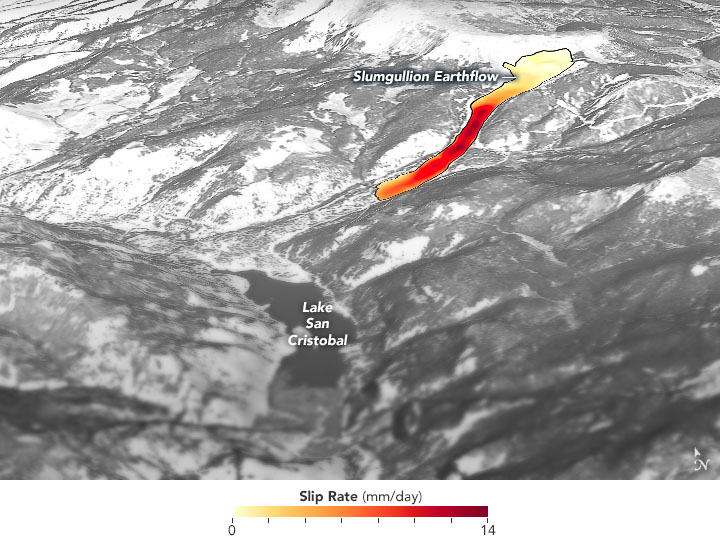 The map above shows where and how quickly land is sliding within the Slumgullion landslide (also known as an earthflow). Land depicted in dark red was found to be sliding as much as 14 millimeters (0.55 inches) per day. The map is derived from data collected during multiple research flights from 2011 and 2018 by the Uninhabited Aerial Vehicle Synthetic Aperture Radar (UAVSAR); those data are overlaid on a digital elevation model from the Shuttle Radar Topography Mission.